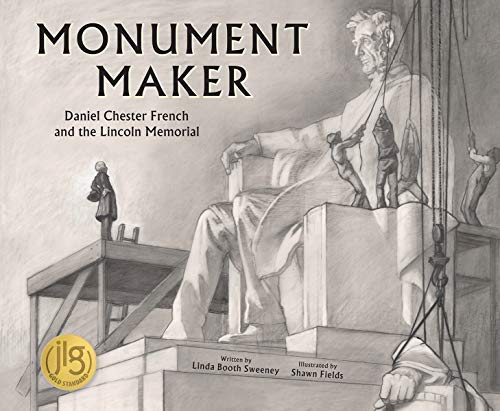 When Abraham Lincoln was assassinated in 1865, fifteen-year-old Dan French had no way to know that one day his tribute to the great president would transform a plot of Washington, DC marshland into America’s gathering place. He did not even know that a sculptor was something to be. He only knew that he liked making things with his hands.This is the story of how a farmboy became America’s foremost sculptor. After failing at academics, Dan was working the family farm when he idly carved a turnip into a frog and discovered what he was meant to do. Sweeney’s swift prose and Fields’s evocative illustrations capture the single-minded determination with which Dan taught himself to sculpt and launched his career with the famous Minuteman Statue in his hometown of Concord, Massachusetts.  This is also the story of the Lincoln Memorial, French’s culminating masterpiece. Thanks to this lovingly created tribute to the towering leader of Dan’s youth, Abraham Lincoln lives on as the man of marble, his craggy face and careworn gaze reminding millions of seekers what America can be. Dan’s statue is no lifeless figure, but a powerful, vital touchstone of a nation’s ideals. Now Dan French has his tribute too, in this exquisite biography that brings history to life for young readers.