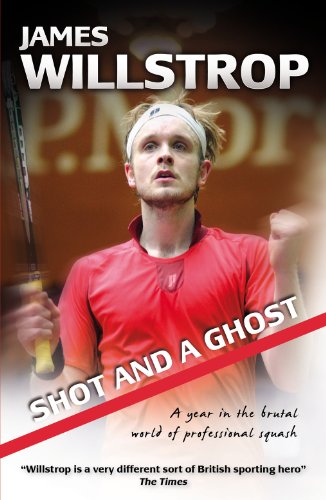 Shot and a Ghost: a year in the brutal world of professional squash (English Edition) por James Willstrop

Titulo del libro: Shot and a Ghost: a year in the brutal world of professional squash (English Edition)

James Willstrop con Shot and a Ghost: a year in the brutal world of professional squash (English Edition)

James Willstrop is one of the world’s leading squash players and one of the sport’s most complex and cerebral characters.

Brought up in Pontefract, UK, he is anything but the archetypal Yorkshireman - a poetry-loving vegetarian with a love of musicals, Morrissey, Oscar Wilde and Philip Larkin.

Fiercely competitive yet renowned for his sportsmanship, he became the world number one in January 2012 despite being accused by many of being ‘too nice’ to be a winner.

At the age of 28 James has just written his first book - a diary style account from January 2010 to February 2011 - which provides a fascinating insight into the life and pressures of an international athlete competing in a sport that takes him all over the world.

As critical of himself as of others, he talks openly about his close relationship with his father and coach, Malcolm; the devastating death of his mother, Lesley; and his fierce and often acrimonious rivalry with fellow Yorkshireman and former world number one Nick Matthew.

His account of sometimes brutal training sessions reveal the pain and dedication necessary to compete at the top of one of the most physically and mentally demanding sports.

Acclaim for ‘A Shot and a Ghost’:

"There aren't many sports book that I read and feel the sportsman himself jumps off the pages. James' book shows the stresses of top level sport on and off the court. A great read."
Matt Pinsent, BBC Sport and four times Olympic gold medalist

"Willstrop is a very different sort of British sporting hero: a militant vegetarian, lover of musicals, obsessive-compulsive with a constant need to wash his hands and a man who had been coached from childhood by his father. Yet he is also one of Britain's finest ever racket sports players and in this fascinating autobiography, he reveals his journey from the cold municipal courts of Pontefract, through crippling injury and personal despair to the world
No 1 ranking in squash. A sportsman who deserves greater publicity than he gets"
Patrick Kidd, The Times